“Are we fast enough?” he asks rhetorically. “If we continue at our current speed, it is going to be very tough.” 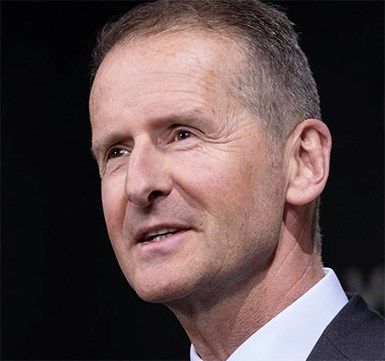 Diess has been urging VW to step up the pace since he took over as group CEO in April 2018. Two months later he opined that the entire German auto industry has a 50% chance of fading away unless it shifts its restructuring efforts into hyperdrive.

“The time of traditional car manufacturers is over,” he told VW executives yesterday.

To avoid falling off the list of “global elite” carmakers, Diess believes that carmakers who intend to survive must rethink their supply chains as they invest heavily in electrification, mobility services, autonomous driving technologies and the digitization of its products and operations.

That’s not just talk. When Diess took over, he hiked the group’s budget for those areas by on-third to $50 billion. He also has more than doubled the company’s electrification goal, from a target of 30 all-electric models set four years ago to 75 announced last month.

At the same time, he has been busy restructuring the company’s 12 brands, looking for noncore assets to shed, improving profitability and attempting to streamline the company’s legendary bureaucracy.

As Diess’ his alarming talk to executives this week underscores, those steps alone won’t be enough.

No carmaker is taking such challenges lightly. But Diess has emerged as the industry’s most vocal proponent of electrification and the implications of next-generation personal mobility, and he’s backing his advice with action.