The news service says review is being driven by CEO Herbert Diess, who is eager to maximize VW Group value and focus resources on the company’s three primary brands: Audi, Porsche and VW.

VW tells the news service that no decision is likely until at least the end of next year. The company tells Reuters there are no plans for a sale or IPO, and it describes Bloomberg’s report as “unfounded” speculation. 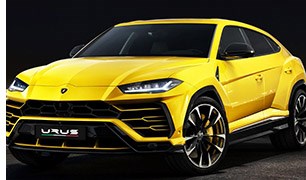 The news service estimated in August that Lamborghini’s valuation had jumped by $2 billion to about $11 billion on the success of the $204,000 Urus high-performance SUV/crossover vehicle it debuted a year earlier.

The coupelike Urus (pictured) helped boost Lambo sales to a record 5,800 cars in 2018. The company says it will limit sales next year to 8,000 units, with the Urus contributing half the total.

VW owns a dozen brands that range from motorcycles and mass market cars to luxury vehicles and commercial trucks. Diess wants to reshape the company to avoid duplicated efforts. “We shouldn’t spread ourselves too thin,” he explains to Suedeutsche Zeitung.