Nearly a year after announcing it, Volkswagen Group has finalized its $2.6 billion investment into Ford’s autonomous vehicle affiliate Argo AI. 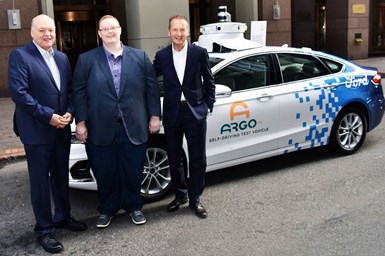 Under terms of the deal, VW will provide $1 billion in direct funding to Argo. The other $1.6 billion represents the value of transferring Audi’s Autonomous Intelligent Driving (AID) unit to Argo.

The investment, which increases Argo’s estimated valuation to more than $7 billion, will help Argo compete against Waymo and General Motors’ Cruise affiliate. Both rivals have received hefty funding of their own over the last year (although Cruise has since scaled back its plans and announced layoffs last month).

The deal gives Argo the largest geographic deployment potential of any autonomous driving technology to date, according to the partners.

Last month, Ford pushed back plans from 2021 to 2022 to launch robo-taxi applications in the U.S. using Argo’s technology. VW is expected to commercialize autonomous vehicle systems by about 2023.

The partnership will allow Ford, VW and Argo to share upfront development costs for next-generation technologies to provide “unmatched capability, scale and geographic reach," according to the partners.

The investment comes less than a week after Ford and VW finalized their plans to collaborate on several future pickup truck and van programs.

But the carmakers maintain they are developing their own distinct businesses and vehicles based on Argo’s platform. Ford reiterates that it remains “fiercely competitive" with VW and has no plans to offer joint mobility services.

Ford previously has committed to spend more than $4 billion on its autonomous vehicle operations through 2023.

As a result of VW’s investment in Argo, Ford says it will be able to reallocate some of this money to better differentiate future autonomous vehicle services, including fleet operations and developing transportation-as-a-service software and fleet operations.

“Investing in and creating the right customer experience is even more important now as the COVID-19 virus has impacted everything—from the way we work to how we shop,” John Lawler, who heads Ford’s Autonomous Vehicles unit, said in a blog post. “Now is the time for us to be thoughtful about the service we are building so it can remain relevant in a changing world and offer customers peace of mind knowing they, or their packages, are in a safe and protected environment inside our vehicles.”

Ford and Argo have been testing prototype vehicles with commercial partners in several cities over the last three years. The carmaker has identified Miami, Washington, D.C., and Austin, Tex., as initial target markets for commercial applications.