VW Goes Back to Work in Europe with Safety Precautions

The facility, which is said to be the largest vehicle assembly plant in Europe, is a major test as the auto industry begins to ramp up production in the region following prolonged shutdowns that started in mid-March in the wake of the coronavirus pandemic. 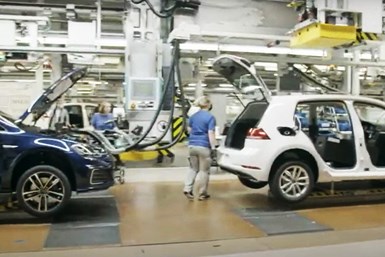 Last week the carmaker reopened assembly plants in Chemnitz and Zwickau, Germany; and Bratislava, Slovakia. Other VW facilities in Germany, Portugal, Spain and Russia also are due to come online in the coming weeks.

But they all pale in comparison to Wolfsburg. The massive 70 million-sq-ft factory, which has built more than 45 million vehicles since it opened in 1945, employs 63,000 people. Last year it cranked out more than 700,000 vehicles, including the Golf compact car and top-selling Tiguan crossover model.

The daily logistics during normal times require precise planning and execution. This includes:

VW is taking it slow in reopening Wolfsburg.

The company plans to build 1,400 vehicles this week on a single-shift operation, starting with the Golf and followed soon thereafter by the Tiguan, Touran and SEAT Tarraco crossovers. Volumes are due to quadruple next week to more than 6,000 units as additional shifts are added.

Even at the higher level, the plant will be producing only about 40% of the vehicles that it had before the shutdown. The gradual ramp-up is due in part to parts availability, uncertainty about demand, distribution capabilities and the need to sell off existing inventory. To date, about 70% of VW’s dealerships in Germany have reopened. 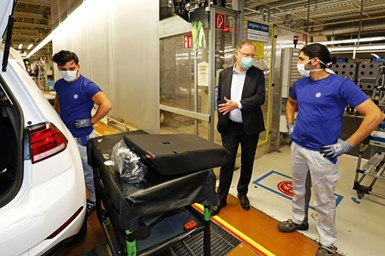 In conjunction with labor groups, the carmaker developed a 100-point plan to better protect workers against COVID-19. In addition to its own facilities, VW is sharing the plan with its network of 40,000 global suppliers and logistics partners.

The new protocols include:

Vehicles also will be spaced farther apart on the factory floor and, where possible, workers will complete their tasks on the assembly line separately. Any parts and tools that previously were transferred directly between employees now will be sent via containers.

Delivery drivers will be required to remain in their vehicles at all times and the machinery used to unload the trucks will be cleaned more frequently.

To help reinforce the new guidelines, distance markers have been placed throughout the plant—including on the factory floor and in meeting rooms—and more than 8,000 safety posters have been added. Every employee also has been sent a detailed booklet that outlines the new procedures.

Every day, employees are expected to complete a self-health checklist and take their temperature at home before coming to work. They also are asked to put on their work clothes at home to prevent crowding in factory changing rooms.

Additional time also will be built in for shift changeovers and to allow employees to clean their tools more frequently. Other precautions include installing several hundred additional handwashing areas and improved air circulation and filtration.

Elsewhere, water fountains have been temporarily removed and cafeterias have been closed. Workers will have to bring their own lunch and snacks, at least initially.

In China, which began to reopen auto plants and other businesses more than a month ago, VW is operating 32 of its 33 plants with combined volume running at more than 60% of their pre-coronavirus levels. The carmaker began implementing its new manufacturing protocols at these facilities, which provided a basis to build on in Europe and elsewhere.

Next week, VW plans to open its plant in Chattanooga, Tenn. This will be followed later in May by facilities in Argentina, Brazil, Mexico and South Africa.