Local connection adds to the appeal of artsy name

Volkswagen will call its upcoming small crossover vehicle the Taos.

It will be unveiled on Oct. 13. Sales will start late next year.

The Taos will serve as VW’s entry-level crossover, slotting below the $25,000 Tiguan. 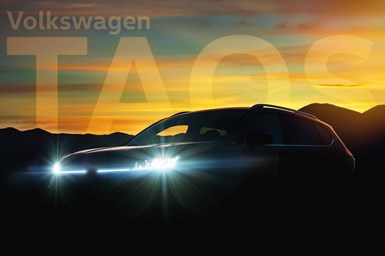 Riding on VW’s MQB architecture, the Taos is expected to be about the same size as the subcompact VW Tharu sold in China. That car is nearly 10 inches shorter than the Tiguan.

In the U.S., the Taos will compete against Chevrolet Trailblazer, Jeep Compass, Kia Seltos, Nissan Rogue Sport and Subaru Crosstrek.

VW will assemble the new crossover at its factories in Puebla, Mexico, and Argentina.

The crossover’s name comes from the picturesque resort town of Taos, New Mexico.

VW said it selected the name, which will be limited to variants of the crossover sold in North and South America, to appeal to U.S. customers.

The New Mexico city has a long and rich history that includes Native American pueblos that date back about 1,000 years. Bordered by the Sangre de Cristo mountains and Rio Grande Gorge, the town is now known for its art community and top-notch skiing.

Its current population is just shy of 6,000 people. That makes it a very small town, which fits with VW’s narrative that “great things come in small packages.”

"It was important to choose a name that really embodied the nature of the car and the town of Taos, New Mexico, was a perfect fit,” explains Hein Schafer, senior vice president for product marketing and strategy for Volkswagen of America.

But there’s more to the story behind the name.

John Muir didn’t make the cut of more than 50 notable people listed on the city’s Wikipedia page. But in certain circles, he may be even more important than his fellow Taoists.

Muir, who had been an aeronautics engineer, switched gears in the 1960s to become an auto mechanic and author. In 1968, he teamed up with illustrator Peter Aschwanden on the classic do-it-yourself repair book “How to Keep Your Volkswagen Alive: A Manual of Step-by-Step Procedures for the Compleat Idiot.”

It doesn’t take a genius to see why the Taos name resonates with VW.