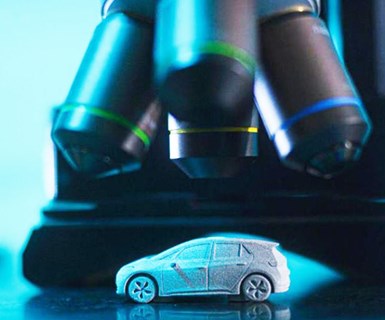 The print run was completed in less than a month using HP’s Metal Jet system, which the supplier claims is as much as 50 times more efficient than other 3D-printing methods. GKN plc’s powder metallurgy unit provided the material for the toy cars.

VW aims to begin using 3D-printed parts in production vehicles early next decade, starting in low-volume cosmetic applications. The carmaker expects to expand usage to functional parts—such as gearshift knobs and mirror mounts—in the mid-term and eventually use 3D-printed parts in soccer ball-size structural parts at volumes of 100,000 units per year.

VW handed out the initial batch of 3D-printed ID.3 souvenir cars at a launch ceremony for the fullsize model at the company’s factory in in Zwickau, Germany. The carmaker plans to distribute the remainder of the scale models to employees and dealers worldwide.