Volkswagen boasts that the upcoming GTD variant of its eighth-generation Golf will be the most powerful and cleanest diesel engine ever offered in the popular small car. 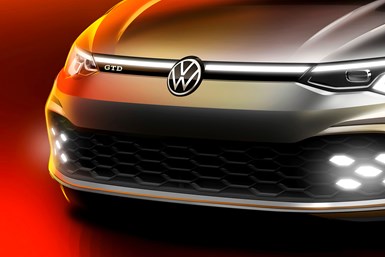 The power aspect isn’t that big of a deal. The previous Golf GTD made only 181 hp. Output is expected to jump about 9% to 197 horses in the new model, according to leaked documents.

But the green bona fides promise to be much more significant. In fact, VW claims the car’s new 4-cylinder TDI diesel will be one of the cleanest combustion engines of any type in the world.

The Golf diesel features a twin-dosing selective catalytic reduction (SCR) system with two catalytic converters. The dual setup allows the devices to work more effectively by treating emissions at different temperatures as they get farther away from the engine.

VW introduced the technology last year in Europe in the Passat midsize sedan. Tests have shown the 2.0-liter “TDI Evo” diesel can provide as much as an 80% reduction in nitrogen oxide emissions vs. traditional single-unit SCRs.

The new engine also is said to be more fuel-efficient than its predecessor, which reduces carbon dioxide emissions.

Late to the Game

VW, which had been using less-expensive lean NOx traps, began switching to SCR shortly after the company’s diesel emission cheating scandal came to light in September 2015.

SCR reduces NOx by injecting a urea-water solution, standardized in Europe as AdBlue, into the exhaust stream. Most carmakers employ the technology.

In the wake of Dieselgate, overall demand for diesel-powered cars has plummeted.

The market share in Europe for such vehicles fell from 50% of new registrations in 2015 to less than 36% in 2018 and just 30.5% last year. Deliveries slipped further in the fourth quarter, dropping to just under 30% of the market.

As a result, carmakers have switched much of their focus to hybrid and electric vehicles as the preferred means to meet future emissions and fuel economy regulations.

VW is leading that charge. The brand is introducing eight electrified vehicles this year, including the ID.3 electric hatchback, and expects to top 1 million EVs by 2023.

Carmakers still expect diesels to play some role in helping to meet future regulations. There are even some new applications planned for the U.S.

For its part, VW is hoping the twin-dosing SCR technology can help clean up its diesel image.

Look for the new Golf GTD to be unveiled at next month’s Geneva auto show. Several performance variants also are in the works.

But their place in the pecking order in the Golf lineup may have been foreshadowed by the GTE plug-in hybrid. It was the first out of the gate among the new variants with its 2019 reveal.