The production version of Volkswagen’s ID.Buzz concept—a modern, all-electric variant of the classic 1960s-era microbus—is due to bow in 2022.

Can’t wait that long to get your groove on? No need. VW’s Commercial Vehicles operation is teaming up with eClassics, which specializes in EV conversions, to restore and update vintage models to run on electric power. The process costs about $69,000 (not including the cost of the donor vehicle).

Dubbed the e-Bulli (one of several nicknames used for the microbus), the retrofitted model is equipped with the same electric components to be used in the company’s upcoming ID-badged EVs when sales kick off later this year with the ID.3 small car. 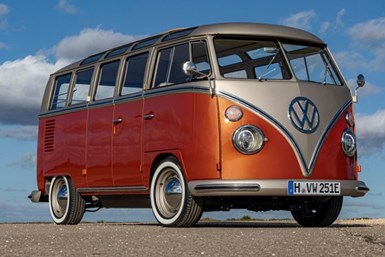 A concept version of the EV produced by eClassics uses a 1966 T1 Samba Bus as its base. The conversion includes a rear-mounted electric motor that generates 82 hp and 156 lb-ft, which is about twice the output of the 1966 model’s 4-cylinder boxer engine. The EV’s top speed is electrically limited to 80 mph, compared with 65 mph for its forebearer.

Housed in the floor, the A 45-kWh lithium-ion battery provides a 124-mile driving range. The battery can be replenished to 80% of its capacity in 40 minutes using a fast charger.

Other updates include a single-speed transmission and multi-link front and rear axles with adjustable shock absorbers and coil-over struts. Handling is enhanced via a rack-and-pinion steering system and four internally ventilated disc brakes.

To stay true to its hippie microbus roots, the 21-window e-Bulli gets a psychedelic two-tone (Energetic Orange Metallic and a matte Golden Sand Metallic) paint job. Rounding out the look are circular LED headlamps and a rear LED array that displays how much charge is left in the battery.