Tiguan accounts for 15% of the carmaker’s global volume
#Volkswagen

So what’s VW’s top-selling model? The Golf? Jetta? Passat? The new Arteon flagship sedan? Or how about the midsize Atlas crossover?

Nope. But you’re on the right track with the Atlas. Just think smaller (in size, not volume).

Earlier this spring VW built the 6 millionth Tiguan since the first-generation model debuted in 2007. The vehicle is produced in four countries (Germany, China, Mexico and Russia) and sold in an astounding 80% of countries worldwide, according to the carmaker.

Needless to say, the Tiguan is a big part of VW’s future and deserves regular attention to keep it fresh.

To this end, VW is giving its popular crossover a mid-cycle makeover and technology upgrade. 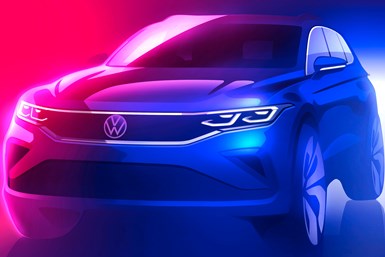 The update features a new front-end—grille, fascia and headlights—that is designed to give the Tiguan a more muscular and dynamic appearance as is evident by the design sketch (right).

LED lights will be standard in the front and rear. VW’s matrix headlights will be optional in Europe. The technology, which allows individual LEDs to be turned on and off as necessary to prevent blinding oncoming traffic, isn’t legal in the U.S.

The interior will get VW’s latest digital and connected technologies, including the large MIB III infotainment touchscreen that recently debuted on the 8th-generation Golf and new Passat. Other goodies include a new multi-functional steering wheel and ambient lighting.

A range of new safety features also will be available, including traffic-jam assist, road sign recognition and advanced lane-keeping assist with lane centering.

Long and Short of It 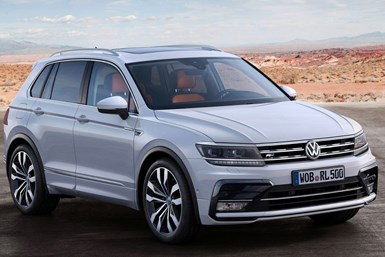 Built on VW’s MQB platform, the current 2nd generation model was introduced in 2016. It was followed a year later by a long-wheelbase variant, which now accounts for 55% of Tiguan’s global volume and is the only version sold in the U.S. (The long-wheelbase model is known as the Tiguan Allspace in Europe and Tiguan L1 in China.)

The makeover will start later this year with the standard wheelbase Tiguan. The long-wheelbase version in the U.S. will get the changes in 2021.