Volkswagen AG says pre-orders for the launch edition of the all-electric ID.3 compact hatchback already have surpassed the 30,000-unit production limit for the 2021 model.

Volkswagen AG says pre-orders for the launch edition of the all-electric ID.3 compact hatchback already have surpassed the 30,000-unit production limit for the 2021 model. 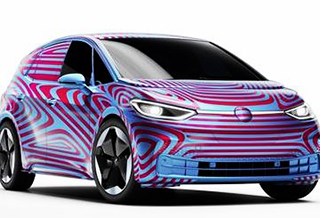 The reservations, which require a €1,000 refundable deposit, began in May. Expecting that some customers likely will drop out, VW says it will continue to add people to the waiting list.

The bulk of the ID.3 1ST pre-orders, which were limited to Europe, came from people in Germany, Norway, the Netherlands, Sweden and the U.K. VW will start taking binding orders later this year.

The carmaker will unveil the ID.3 (pictured in camouflage) at next week’s Frankfurt auto show. Deliveries of the ID.3 1ST will begin next summer.

The ID.3 1ST will have a starting price of less than €40,000 ($44,000) in Germany (before EV subsidies). The vehicle will feature special badging and be equipped with a 58-kWh battery that provides an estimated driving range of 420 km (261 miles) on Europe’s WLTP cycle.

The new hatchback is the first of several electric models that VW will market under its new “ID” sub-brand. Built on VW’s MEB (modular electric toolkit) platform, the ID.3 is about six inches longer and slightly wider and taller than the Golf compact car.