Heavy-duty trucks promise to be among the first applications for fully autonomous vehicle systems.

ZF aims to be a leading supplier in the market. It took another step in that direction with the completion of its $7 billion acquisition of Wabco Holdings.

The deal, which has been in the works for several years, was finalized on Friday after the companies received the final regulatory approval from China earlier this month.

Wabco, whose origins date back to 1869 as Westinghouse Air Brake Co., supplies brake, suspension and other systems for commercial trucks, buses and trailers. The Brussels-based company also provides telematics and fleet management technologies. 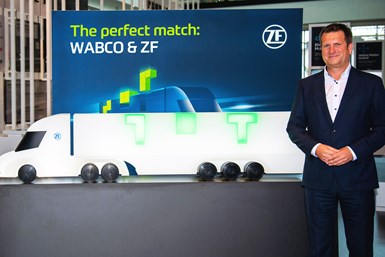 That was the clincher for ZF. The driveline and chassis specialist has been ramping up its own autonomous vehicle efforts over the last several years (led by the former TRW operations that it acquired in 2014), with an increasing focus on commercial trucks and shuttle services.

ZF, which has committed to spend more than $13.6 billion on autonomous and electric vehicle systems in coming years, aims to launch a fully autonomous Level 4 commercial truck system by 2025. The German supplier also is partnering with TuSimple to help the San Diego startup commercialize its self-driving truck platform.

Commercial trucks are well suited for autonomous operations. They typically operate over fixed routes, which can be easily mapped and updated with high-definition imaging systems.

Trucks also stand to benefit from the safety and fuel efficiency benefits enabled by self-driving operations. TuSimple estimates its autonomous technology can help reduce fuel consumption by 10% through more efficient acceleration and braking.

Wabco will operate as an independent division, called Commercial Vehicle Control Systems (CVCS), within ZF. It will work with ZF’s existing Commercial Vehicle Technology (CVT) and Aftermarket divisions, as well as the company’s global development team.

CVCS will employ some 12,000 people at 45 locations. It will be headed by Fredrik Staedtler (pictured above), who previously led CVT. Former Wabco CEO and Chairman Jacques Esculier has retired.

The Wabco acquisition also beefs up ZF’s purchasing power and makes the supplier less dependent on the economic cycle of the passenger car industry.

Last year, ZF and Wabco had sales of $40.5 billion and $3.4 billion, respectively. The combined companies employ 160,000 people worldwide at 260 locations in 41 countries.